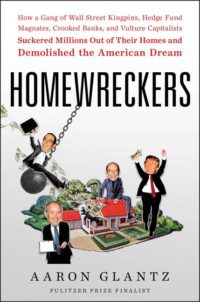 In the spirit of Evicted, Bait and Switch, and The Big Short, a shocking, heart-wrenching investigation into America’s housing crisis and the modern-day robber barons who are making a fortune off the backs of the disenfranchised working and middle class—among them, Donald Trump and his inner circle. In Homewreckers, Aaron vividly reveals how a group of Wall Street bankers and private equity titans including Trump cabinet members Steve Mnuchin and Wilbur Ross, as well as the president’s confidants and funders Steve Schwarzman, Tom Barrack — exploited a system in which billions of dollars in wealth was transferred to them from millions of individual homeowners after the real estate bust of the Great Recession. The result is an eye-opening expose of the greed that decimated millions and enriched a gluttonous few.

“Remarkable …a must-read for anyone who wants to understand the Great Recession and the role of the voracious financial interests who would go on to put Donald Trump in the White House.“

-Gwenda Blair, author of The Trumps: Three Generations of Builders and a President

The failure of the American adventure in Iraq is all the more tragic for its promising beginnings, according to this engrossing memoir of the occupation and insurgency. ost Iraqis applauded the United States for overthrowing Saddam Hussein. Working as an unembedded journalist in Iraq, Aaron Glantz saw that goodwill squandered, as Iraqis grew increasingly angry at the continuing absence of electricity and clean water, high unemployment, anarchy in the streets and mass imprisonment of innocent people by American soldiers who couldn’t tell insurgents from civilians. With the brutal sieges of Fallujah and Najaf in April 2004, Aaron shows, the transformation of the United States in the eyes of Iraqis from liberator to oppressor was complete.

“A frank and brave appraisal of one of the most potent issues facing our nation.“ 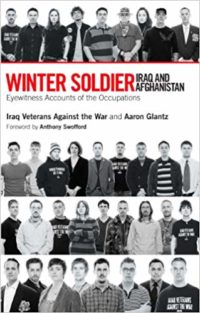 Winter Soldier: Iraq and Afghanistan: Eyewitness Accounts of the Occupations

Veterans of Iraq and Afghanistan describe, in their own words, the crimes of war they witnessed. In spring 2008, inspired by the Vietnam-era Winter Soldier hearings, Iraq Veterans Against the War gathered veterans to expose war crimes in Afghanistan and Iraq. Here are the powerful words, images, and documents of this historic gathering, which show the reality of life in Afghanistan and Iraq. Through their testimony, the veterans show that well-publicized incidents of American brutality like the Abu Ghraib prison scandal and the massacre of an entire family of Iraqis in the town of Haditha are not the isolated incidents perpetrated by “a few bad apples.” They are part of a pattern, the group says, of “an increasingly bloody occupation.”

“An enormously important project… cuts this debacle to the bone, exposing details hard to come by and even harder to believe. This is must reading for patriots who have already begun the effort to insure that this never happens again.“ 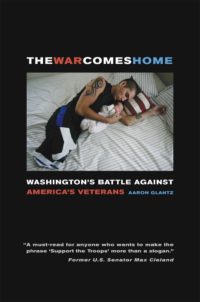 The War Comes Home is the first book to systematically document the U.S. government’s neglect of soldiers returning from Iraq and Afghanistan. Aaron Glantz, who reported extensively from Iraq during the first three years of this war and has been reporting on the plight of veterans ever since, levels a devastating indictment against the Bush administration for its bald neglect of soldiers and its disingenuous reneging on their benefits. Aaron interviewed more than one hundred recent war veterans, and here he intersperses their haunting first-person accounts with investigations into specific concerns, such as the scandal at the Walter Reed Army Medical Center. The book does compels us to confront how America treats its veterans and to consider what kind of nation deifies its soldiers and then casts them off as damaged goods.

“A must-read for anyone who wants to make the phrase, ‘Support the Troops,’ more than a slogan.“